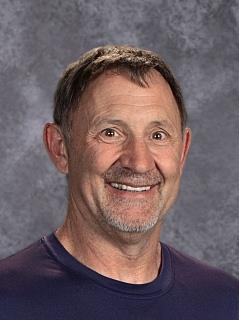 Mr. Neibauer is starting his 22nd year at Greeley Central, and has been teaching 27 years overall. He teaches Earth Science and Astronomy. In addition to teaching, he is also the former head track and field coach at Central, a sport he coached for 32 years.

Mr Neibauer was born in Billings, Montana, and spent most of his childhood in Albuquerque, New Mexico, where he graduated from Sandia High School in 1979. In High school, he competed in cross country and track.

Following High school, he spent two years at New Mexico Junior College in Hobbs, New Mexico where he earned an associate’s degree. While at NMJC, he competed in track and earned All- American status in the pole vault and decathlon.

In the fall of 1981, he transferred to The University of New Mexico where he completed his bachelor's and master’s degrees in education. While at New Mexico, he continued to compete in track and field earning NCAA Division I All-American status in the decathlon. Mr. Neibauer began coaching track in 1983 and continued to compete after college for many years. In 1984, he competed in the U.S Olympic Trials in the decathlon.

Prior to beginning his teaching career in 1992, Mr. Neibauer worked several years in the construction industry as a construction estimator and as an architectural hardware consultant.

Mr. Neibauer loves competition and considers himself an outdoor enthusiast and an adrenaline junky. Throughout his life, he has participated in a number of activities including; hiking, running, mountaineering, weight lifting, rock climbing, road biking, mountain biking, and BMX racing. He is still an avid bicyclist and competes occasionally in various types of bike races. He was once a competitor on the television show"American Gladiators". He is also a die-hard Green Bay Packers fan. In addition to athletics, he is fascinated by science and nature and considers himself a strong environmental advocate.

Mr. Neibauer has two adult children. His son Nathan graduated with a physics engineering degree from Colorado School of Mines and a master’s degree in applied physics from the University of Oregon. He is currently working as a physicist in the field of energy research. His daughter Addy is a senior at the Colorado School of Mines majoring in biochemistry. Both children are graduates of Greeley Central High School.