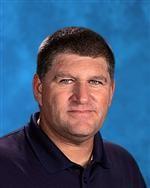 After graduating from Greeley West High School in 1987, Brian spent a year at Colorado Northwestern Community College playing baseball and working on his education degree before transferring and finishing his degree and playing career at the University of Northern Colorado.  Before starting his teaching career, he spent 3 years coaching baseball at University High School in Greeley.

Brian returned to Greeley West in 2000, where he spent a majority of his days teaching Health Education and coaching varsity baseball. In 2007, he started his head coaching career in baseball.  In 2007 and 2010, the Spartans had outstanding seasons playing in the 4A State Final Four! In 2007, he was selected as the Coach of the Year in 4A by the Denver Post sports reporters.  In 2015, he was selected as Teacher of the Year by his fellow staff members at Greeley West High School.

After receiving his Master's Degree in Educational Leadership and completing the Principal Licensure Program, Brian has transitioned himself from the classroom to the main office.  His new position is called Instructional Behavioral Lead, which consists of working with new teachers in the building and handling the duties of a Dean of Students.  Soom his postion was changed to the Dean of Students where he handled the discipline and restorative practices in the school.  In this position, he was also assigned to mentor the new teachers to Greeley West every school year.  After 3 years in this postion, Brian decided he missed the relationships that he had with his students and transitioned back to the classroom

Brian's wife, Heidi has been teaching in the Windsor School District for 21 years. She currently is an Intervention Math teacher at Severance Middle School where she has spent several years coaching high school and middle school volleyball.

Brian has 2 boys, Brandon and Tyler. Brandon, who was a 2014 graduate of Greeley West, and a 2018 graduate of Colorado School of Mines where he earned a degreee in Civil Enginerring.  He is currently employed with Hensel Phelps Construction as a Field Engineer.  Tyler is a 2019 graduate of Greeley West where he earned the honor of Athlete of the Year while competing in tennis, basketball, and baseball.  He is currenlty in his sophomore year attending and playing baseball at Scottsdale Community College in Scottsdale, Arizona.  He is also working toward a degree in Civil Engineering.

After spending 27 years of coaching high school baseball, Brian retired in 2019 in order to be a parent and watch his son play in the spring in Arizona.  He has currently accepted the Varsity Assistant Softball Coaching position in fall at Greeley West.