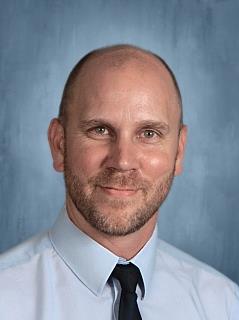 Mr. Allen was raised in a small town surrounded by farming country in Missouri. After earning his degree in Music Education and Music Composition at the University of Dayton, Mr. Allen became an English teacher in a small Japanese village.  He returned to the US and settled in Colorado Springs where he became a music teacher, then a school counselor and finally a school administrator. He decided to move abroad with his family and took a position at an international school in Beijing, China.  After traveling the world and experiencing different cultures for three years, he was happy to return to Colorado as the assistant principal at Greeley West High School.

When Mr. Allen is away from school, he enjoys rock climbing, playing guitar in rock bands, and spending time with his wife and three kids. He’s happy to be part of the Greeley West Community, and he’s proud to be a part of the excellence that is GWHS.