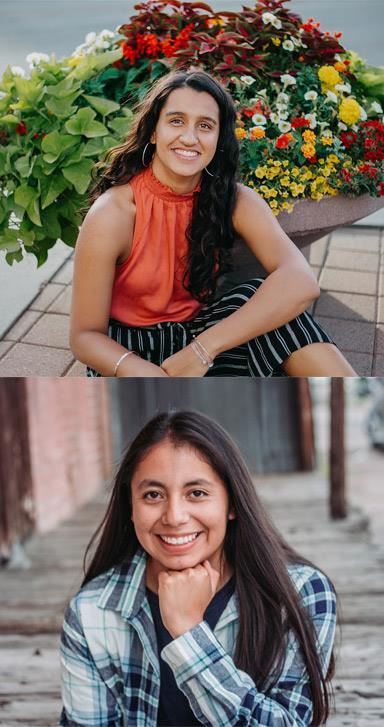 Two Greeley-Evans School District 6 high school seniors are eligible for the prestigious Boettcher Scholarship this year. Mikyla Bowen of Northridge High School was selected to receive the scholarship and Gracejit Chahal of Greeley West High School was chosen as an alternate recipient.

The Boettcher Foundation awards 40 scholarships per year that pay the full cost of tuition at any four-year college or university in Colorado, as well as fees, a book allowance and an annual stipend for living expenses. Thousands of students undergo a rigorous application and interview process to compete for this prestigious award. Students are selected based on their superior scholastic abilities, evidence of leadership and involvement, service to the community and their school, and outstanding character.

Mikyla checked the mail every day after her interview until she finally received a large envelope with the Boettcher address at the top.

“I couldn’t even wait to go home so I opened it while standing at the mailbox,” Mikyla said.  “I was so nervous … but when I read the line that (said) I received the scholarship, I was in a state of euphoria.”

She sprinted home to show her mom the letter, then scheduled a video conference to share the good news with the District 6 staff members who wrote her letters of recommendation: Northridge English teacher Darren Ekern, history teacher Josh Seematter and wellness coordinator Rachel Hurshman.

In her application essay, Mikyla wrote about her relationship with her mother, which was forged through adoption.

“(My mom’s) significance in my life is her ability to be the right person at the right moment,” Mikyla said.  “I chose this story because I wanted to show who I was as a person and how I became that person because of my mom.”

One of Mikyla’s greatest challenges during high school was studying Advanced Placement U.S. History independently. Mr. Ekern and several other teachers encouraged her to start studying the material on her own because the class was not offered by Northridge that year. She woke up two hours before school every morning to watch online lectures and read the textbook after soccer practice.  Following months of hard work, she earned a passing score of 4 on the test and will receive college credit for the course.

“It was a huge accomplishment for me given the circumstances and obstacles I had to overcome,” Mikyla said.

Her proudest accomplishment was placing third at the State Leadership FBLA conference in the category of digital video production with her teammate, Taylee Beilman.

“The third place award also allowed us to compete at nationals, which was a great event and networking experience,” Mikyla said.

Mikyla will attend Colorado State University to double major in neuroscience and data science with a concentration in computer science. Her eventual goal is to earn a doctoral degree in Computational Neuroscience.

Gracejit, who goes by Grace, also has an aptitude for digital technology. Her greatest accomplishment during high school was creating a social media campaign as Student Body President to increase student participation in school-sponsored activities and events at Greeley West.

“I convinced Principal (Jeff) Cranson and my teacher sponsor to allow me to create a school SnapChat [account] to post advertisements, surveys and live videos from events,” Grace said.  “In just a couple months, membership in Student Council and community service clubs doubled, and record numbers of students tried out for sports and attended the Homecoming Dance.”

“My parents have always been super supportive,” Grace said. “Being immigrants, they’ve taught me to always work with integrity and always stay committed to my word.”

Grace wrote about her experience as an Indian-American in her application essay by describing an encounter she had with a four year old boy while teaching swim lessons.  In the middle of the lesson, the boy bluntly exclaimed, “Wow!  Your face is brown!”

“It made me rethink how I view myself, my own identity and how I talk to others about it,” Grace said. “I came to the conclusion that especially in Greeley where diversity is beginning to explode, it’s important to have honest and open discussions regarding who we are, not just with children but adults as well.”

Grace was accepted to the University of Colorado at Boulder and the University of Richmond, which offered her a full scholarship. Her chances of receiving the Boettcher scholarship are good, given that some initial recipients turn it down to attend out-of-state universities. She is waiting to hear from the Boettcher Foundation on April 17 before she makes a final decision. She plans to study sociology and  pre-medicine.